Harnessing the Power of Vedic Rituals

India pulsates with rituals and sacred ceremonies, many dating back thousands of years into Vedic times. The Vedas themselves are filled with mantras, chants, and rituals for just about any purpose you can imagine.

These sacred rituals are an integral part of Indian life, used before any new undertaking and to:

Deepak Chopra talks about whenever his parents bought a new car, they would do a ceremony to ask for the blessings of Ganesh (the remover of obstacles) before they would drive the car. (Not a bad idea, if you’ve ever driven in India!)
Modified versions of these Vedic rituals can still be incorporated into your life today.

Throughout India, the essential essence of a deity or saint is considered to be present in its image. These images represent an aspect of Divine Consciousness and are, as such, treated with great respect, whether residing in a temple or a home shrine. Devotees view the temple or shrine as the “home” of the deity. They keep it clean and bring offerings to ensure the comfort of the presiding deity.

Just as you bathe every day, a ceremony called Abisheka is performed to the deity each morning and evening. Literally meaning “ritual bath,” the deity’s clothing (usually a wrap-around cloth) and adornments are removed, and the deity is bathed or anointed with panchamrita—the five nectars, which are honey, milk, yogurt, sugarcane juice, and ghee.

Sometimes fruit, cooked rice or other “favorite” items of the deity are also used. Special mantras are chanted during the process and the image is finally bathed with fresh water. When the bath is complete, the image is dried and dressed for the day or retired for the night.

What you can do: While this is quite complicated, those of us who have statues, pictures, or images of our archetypes or teachers should try to keep them in a clean and respectful setting. Place a fresh flower, candle, or incense in front of them or decorate them however you feel appropriate.

Every morning and evening in India, the ceremony of Aarti (offering light) is performed in temples, shrines, ashrams, and on the banks of sacred rivers. This beautiful ritual involves the devotional waving of lamps (usually containing burning ghee or camphor) before the image of the presiding deity, guru, or a sacred aspect of nature.

The image or guru represents the Immortal Soul, while the lamp represents the individual soul seeking Oneness with the Divine. The ritual is usually accompanied by sacred chanting, singing songs of praise, offering flowers and incense, and the ringing of bells and blowing of conches.

Lasting anywhere from 5 minutes to an hour, Pujas are performed on a variety of occasions and settings. The Puja includes simple offerings such as fruit and flowers and is usually an expression of gratitude or confirming your connection with a higher reality. It can be a simple daily ritual done in the home or workplace or longer temple ceremonies celebrating annual festivals or lifetime events such as a birth, a wedding, or before beginning a new venture. Pujas are also often performed prior to a spiritual instruction such as learning to meditate.

What you can do: While there are specific prayers and chants to accompany a traditional ceremony, a Puja is also something you can create yourself to enliven your archetypal energy. It can be as simple as standing in front of a representation of a deity or great teacher, offering a piece of fruit, some flowers, lighting an incense stick, and bringing our palms together with the blessing “Namaste.”

At a time of transition in your life, take two small candles, such as tea lights. Mark one so you can tell them apart. Hold one candle in your cupped hands and have the intention of releasing everything that no longer serves you into the candle. Now, take the other candle and pour into it all the good things you want create in your life. When you go to bed that evening, light the first candle (place it somewhere safe) so that everything you want to release is burned away during the night. First thing the next morning, light the second candle so all the good things can begin to flow into your life as you move into your day.

Yagyas are the longest and most elaborate ceremonies, lasting anywhere from one or two hours to several days. Because of their complexity, they would normally be performed by one or more Vedic priests, with the aim of changing your own or the circumstances in the world. Although they can be conducted at any time, the most auspicious date to achieve the desired result is usually chosen by a Vedic astrologer.

A Yagna is traditionally a fire ceremony. A special, square fire-pit (kunda) is constructed and participants sit around it, offering a variety of items into the fire. This is accompanied by the chanting of sacred mantras and symbolizes offering to your own internal fire of transformation. Everything has its own special significance, from the types of wood to each item offered and particular chants used.

Cow’s ghee is one of the main ingredients in all Yagyas as it is said to magnify the potency of any other item. As an item burns, it becomes rising smoke, which combines with the vibration of the mantras, spreading their effects and influence throughout the cosmos at a very subtle level.

What you can do: It wouldn’t be easy to create your own traditional Yagna. However, fire is a great purifier. Try journaling or “free-writing” as a means of processing unwanted thoughts and emotions. Then, periodically create a small ceremony to burn these writings and celebrate their release to the Universe.

A Yatra is a pilgrimage to a sacred site, which might be a temple, a shrine, a river, a mountain, or an Enlightened Guru. Most Indians will take part in at least one significant Yatra during their lifetime often accompanied by a group of other Yatris.

A Yatra can be as simple as a procession within one’s hometown or can involve a journey lasting weeks or even months. The journey itself is considered as important as the destination, and any hardships of travel serve as acts of devotion in themselves.

After arriving at the destination, it is auspicious to perform a Parkrama. This entails circling the site in a clockwise direction. Smaller sites, such as temples and shrines, are usually circled three times, although up to 108 times may be observed. Larger or more difficult paths can be limited to one circumambulation.

When a full pilgrimage journey cannot be performed—such as following the length of the River Ganges or reaching a mountain peak—pilgrims will often be seen standing with hands in prayer position, revolving in a clockwise direction as a token pilgrimage.

What you can do: Visiting a sacred place is believed to purify the self and bring one closer to the Divine. Nowadays, we have cars and airplanes to transport us quickly and comfortably. Whether you visit special places in your local area or make longer journeys, try to connect with the energy and devotion of the thousands of pilgrims who have made the same journeys for centuries.

The Vedas place great emphasis on the value of performing rituals and visiting sacred places. Enjoy making them part of your Sadhana—or daily spiritual practice.

Meditation and Your Dosha 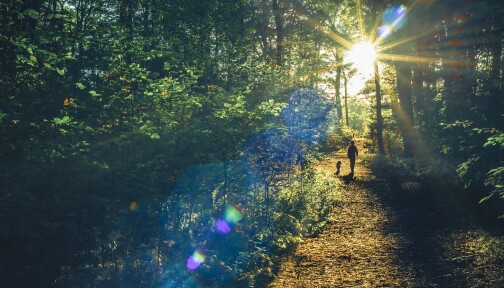 Meditation to Create Balance for the Doshas