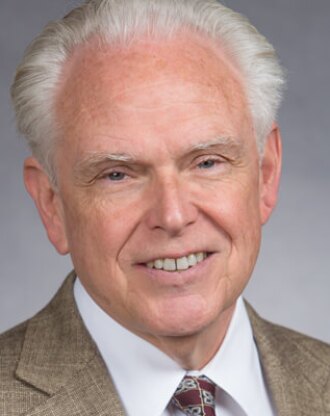 William C. Mobley is a Distinguished Professor and Chair of the Department of Neurosciences at UCSD. He also serves as Executive Director of UCSD's Down Syndrome Center for Research and Treatment and is the Florence Riford Chair of Alzheimer Disease Research.

He came to UCSD in June 2009 from Stanford University in Palo Alto, Calif., where he served as the John E. Cahill Family Professor in the Department of Neurology and Neurological Sciences and was the founding director of the Neuroscience Institute.

Dr. Mobley has a distinguished record of academic achievement and is considered one of the most prominent academic neurologists in the US. He has an international reputation for his research on degenerative disease of the central nervous system as well as being a leader in translational medicine, bridging clinical and basic science.

Dr. Mobley earned his Ph.D. from Stanford University in Neuro- & Behavioral Science in 1974, and an M.D. from the same institution in 1976. He then completed an internship in pathology in 1977, also at Stanford, and went on to complete a residency and fellowship in neurology and pediatric neurology at The Johns Hopkins University in 1982. While there he was selected to serve as Chief Resident in Pediatric Neurology from 1981 to 1982. In 1983, he became certified by the American Board of Pediatrics and in 1987 was certified by the American Board of Psychiatry and Neurology with Special Competence in Child Neurology.

Dr. Mobley's research focuses on the neurobiology of neurotrophic factor actions and signaling and on the hypothesis that dysfunction of such signaling mechanisms contribute to neuronal dysfunction in developmental and age-related disorders of the nervous system. His emphasis on the neurobiology of Down syndrome has brought new insights into the disease, including possible treatments. He has also done pioneering work on the neurobiology of Alzheimer's disease (AD) using a mouse model of Down syndrome. These studies were based on the observation that virtually all adults with Down syndrome develop Alzheimer's disease by age 50. This knowledge paved the way for Dr. Mobley's ongoing studies of AD in experimental models.

Dr. Mobley has received many awards and distinctions. He is a member of the Institute of Medicine, National Academy of Sciences. He collaborated with the Dalai Lama to create the Center for Compassion and Altruism Research and Education at Stanford University. He also serves as the expert advisor to the Congressional Down Syndrome Caucus (for which he won the Christian Pueschel Memorial Award in 2007).

He is the recipient of both the Zenith Award and the Temple Award from the Alzheimer's Association and was chosen to receive the Cotzias Award of the American Academy of Neurology in 2004. Dr. Mobley is Past President of the Association of University Professors of Neurology, of the Professors of Child Neurology, and of the International Society for Developmental Neuroscience. He is a Fellow of the Royal College of Physicians and in 2006 was named a Fellow of the American Association for the Advancement of Science.

In 2011 Dr. Mobley was honored with the International Sisley-Jérôme Lejeune Prize in Paris by the Jérôme Lejeune Foundation for his contributions to the field of Down syndrome and genetic intellectual disabilities. This led to his recognition by U.S. Rep. Pete Sessions on the floor of the House of Representatives.  He was inducted into the Johns Hopkins University Society of Scholars in 2014.