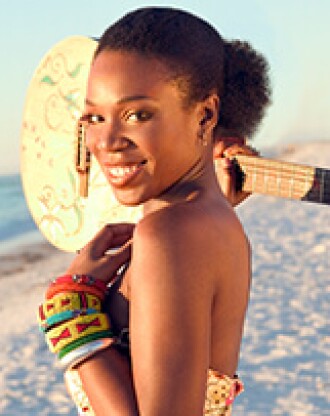 Sometimes you have to step back to move forward. Coming to that realization—let alone taking that crucial first step—can be a daunting endeavor. Now on the other side of a self-imposed four-year hiatus, India.Arie returns with the most illuminating album of her career.

“This is where I’ve been for the last four years,” reflects the singer. “I’ve struggled most of my career to feel comfortable with how things were, how I was treated, the politics of the music industry. I needed to pull back from the public eye to ground myself and rebuild my life and career. It’s a process many of us go through: spiritual maturation, spiritual awakening, clearing out the old and starting anew.”

Her inner renewal pulsates throughout SongVersation, starting with lead single “Cocoa Butter.” The mid-tempo groove and image-rich verses mirror the soothing balm that is the song’s namesake. “Your love is like cocoa butter on my heart … \ I show you my burns \ you show me lessons learned,” sings a re-energized India.Arie.

The singer exudes quiet power on the non-apologetic “Life I Know” as well as the empowerment-themed “Just Do You.” With its spare instrumentation, honest and engaging lyrics framed by melodic R&B, SongVersation finds India.Arie coming back full circle to the basics that captivated a global legion of fans on debut album Acoustic Soul.

But underscoring those basics now is a fervent spirit born out of epiphanies, health imbalances and hard decisions that occurred over the past four years.

“On my last two albums, I felt like I was fighting to grow,” says India.Arie. “And that was dehumanizing. Everything became and sounded more complex, instead of me just being.”

No more. As India.Arie sings on the album’s centerpiece “Break the Shell”: “Child, it’s time to break the shell \ Life’s gonna hurt but it’s meant to be felt \ You cannot touch the sky from inside yourself \ You cannot fly until you break the shell.”

“Putting spiritual and empowerment ideals into music concepts … that’s always been the core message of my music—and it seemed I was talking to others …” says India.Arie. “But the truth is that it was my message to myself because I was yearning to know the peace of a self-defined life.”

Born in Denver and later relocating to Atlanta as a teen, India.Arie went from “singing under a tree in the park” to the Grammy Awards stage in five years, earning seven nominations for her 2001 double-platinum debut Acoustic Soul featuring her first hit single “Video.” That was followed in 2002 by the platinum-selling Voyage to India, 2006’s gold-certified Testimony: Vol. 1, Life & Relationship and its 2009 sequel Testimony: Vol. 2, Love & Politics. But despite 21 Grammy nominations, four Grammys and 10 million albums sold worldwide, something was wrong.

“In 2009 I let go,” recalls India.Arie. “I realized I had to seize the chance to make the career and life I wanted, not accepting what others wanted me to do. So I decided to retire, asking God to show me where I am supposed to be.”

Music did eventually come back into her life through a series of vulnerable songs she began writing for a self-funded new project called Open Door. But three years into the project, she shelved it. “I was confronted by the same questions,” says India.Arie. “Who are you? How are you shaping the big picture of your life?”

Exhausted from writing and recording Open Door, the singer didn’t feel like doing another album. But instead of waiting another three years, she took a day to pray. Six months later she finished SongVersation.

“That was my first glimpse of a new resilience, of stepping into my power,” she recalls. “It’s about not having anything to prove except to simply express myself because it’s who I am—not as a means to an end. Chasing that and topping that is not me. It’s about being more me in both my life and career.”

She recently embraced the former by expanding Soulbird, her label imprint, into a multi-faceted company housing her other entrepreneurial endeavors: jewelry, apparel, merchandise, film and TV, music and book publishing. She’s also ready again for fans to hear India.Arie, the singer/songwriter.

“I wasn’t ready until now,” she says. “I love where things are on and offstage. I trusted my intuition through every line and note of every song on this album, following the flow. And the ease of the flow is always a sign that I am in the right place, doing the right thing. And that is all I’ve ever wanted. I created SongVersation from that place.”