Our Chief Meditation Officer Roger Gabriel’s spiritual journey is far from over, but here you will learn how it began and how he continues to learn and teach—across the globe.

My father was an engineer who traveled the world working on various projects. Growing up, this seemed like a great life to me so I decided that I would become a civil engineer and travel the world building bridges. I went to college in the 1960s only to be faced with endless mathematical calculations, when all I wanted to do was read poetry and listen to folk music. I realized it had been a nice idea but engineering wasn’t for me.

Fortunately, soon after leaving college, I found meditation. My job had moved me to a town on the east coast of England. It was winter, and not knowing anyone, I decided to attend a local course on Transcendental Meditation (TM). From my first meditation, I knew this was what I wanted to do with my life. Bad habits such as smoking and drinking effortlessly fell away and I returned to my childhood vegetarianism.

Within six months, I was in southern Spain, volunteering for the TM Organization to earn my teacher training. In 1973, under the guidance of Maharishi Mahesh Yogi, I became a meditation teacher. Ironically, since then, I have traveled the world, helping people build bridges between their local and non-local selves. I guess you could call me a meditation engineer! This was my first experience of allowing the Universe to handle the details.

I taught meditation in England before moving to the US and began teaching and working for the TM Organization there. I took all the advanced techniques and courses that were offered, including Maharishi bringing 7,000 of us to meditate together in Fairfield, Iowa, for a week. In 1985, I moved to Fairfield, in a short-lived attempt, to be part of the permanent community of meditators.

In the early 1980s, Maharishi began bringing the ancient wisdom of Ayurveda to the Western world. The combination of meditation and Ayurveda resonated with me as I explored it further. I was hired by TM to set up Ayurvedic treatment centers around the US. My job was to establish the location, equipment, train the staff, and hire a doctor. After completing a Los Angeles center, I was sent to Washington DC.

Deepak Chopra was also a TM meditator. At this time he had a large, busy medical practice outside of Boston but, under Maharishi’s guidance, was becoming interested in Ayurveda and complementary medicine. He’d published his first book and, although still unknown outside of his practice and the TM community, we started inviting him to DC to talk to the community. During these visits, Deepak and I became friends.

And when my assignment finished, he invited me to move to Boston and work with him. He still had his allopathic practice but wanted help also establishing a holistic practice. I loaded my car and drove up to Boston early in 1987 (in a blinding snowstorm) and the rest, as they say, is hysterics! Deepak’s practice was on the ground floor of a medical building and I had a small office upstairs. During the day, Deepak would come up to share his latest ideas until his nurse would arrive and demand that he returned to his patients.

The TM Organization owned a large mansion set on 200 acres in central Massachusetts, which they converted into a residential Ayurvedic center. Deepak was put in charge medically and I helped with the administration. I also began promoting Deepak in the local area by setting up talks, which we would drive to, hoping at least a few people would attend. I would sell the book during the break! We spent many evenings sitting around his kitchen table making future plans but having no idea that, what was then just the two of us, would grow into the Chopra of today.

Deepak continued writing books and his popularity quickly grew. As well as Ayurveda, he was exploring all aspects of mind-body medicine. In 1993, he felt it was time to branch out on our own. We relocated to San Diego, teamed up with Dr. David Simon, and the seed of what is now Chopra was born. These were exciting times. We established an Ayurvedic treatment center and revived ancient Vedic wisdom to create Primordial Sound Meditation and the Perfect Health programs. We developed workshops and seminars, which Deepak, David, and I offered around the world.

Realizing that it would be impossible for the three of us to teach the whole world, in 1994 Deepak asked me to go to Mexico and teach our first Primordial Sound Meditation teacher training course. As we had never done this before, I was basically creating it as I went and taking copious notes, which later became the foundation of today’s training programs.

I continued with my own studies and began traveling regularly to India, sometimes leading small groups to my favorite places. I was fortunate to meet and study with several spiritual teachers, both in the US and India, learning many techniques and having some profound experiences. In 2003, I was invited to visit the Shree Satuwa Baba Ashram in Varanasi. On meeting the Guru, Maharaji, I knew that destiny had brought me there and I began the start of what was to be a beautiful relationship. My spiritual journey took a quantum leap.

By 2006, I was feeling that my role at the Chopra Center was no longer serving my growth. Deepak was traveling and my work had become routine. For the good of myself and the Center, I felt it was time to leave. Not knowing where I would go or what I would do, I decided to trust the Universe. Since that time I have tried to adopt the Buddha’s “way of the open hand” in which he says, “I don’t have a closed fist, my hand is open. Everything I know that can help you cross the sea of life is yours for the taking.”

I moved to Colorado and ran a spiritual non-profit organization for several years and taught private workshops wherever I was invited. I always made sure I had enough time to visit Maharaji two or three times each year. The Ashram is part of a 300-year-old lineage, which has a residential school for boys and caters to visiting pilgrims. It is traditionally Vedic and I am one of only a few Westerners who visit. However, I was quickly accepted and made one of the family. The boys use me to practice their English and the older residents patiently teach me the subtleties of ashram life.

Up to then, in addition to meditation, my spiritual practices had mostly consisted of reading the ancient texts, listening to discourses, and asking questions. However, my Hindi isn’t worth mentioning. And, even though I knew he had a vast wealth of wisdom, Maharaji didn’t speak enough English for us to have deep philosophical discussions. Maharaji was the purest, simplest, humblest, embodiment of unconditional love I have ever met. I realized that these qualities were what I needed and this was why I was there.

I started spending three to four months a year in India, mostly just observing Maharaji, hoping something would rub off. I would meditate while he did his early morning puja and watch how he greeted the endless stream of pilgrims seeking his blessings. Some days we would take a boat ride on the Ganges or visit the cows at the Ashram farm. We spent five days driving across India to visit a sacred river and spent weeks camped in the midst of millions of spiritual seekers at great festivals. During this time, Maharaji gave me my spiritual name, Raghavanand, and we were eternally bonded. I learned more from Maharaji’s silence than all the books I had read and have wonderful memories from those times.

During my times in India, I visited many sacred sites and met many fascinating people. I made pilgrimages into the high Himalayas, including to the source of the Ganges. With a couple of friends, we spent three weeks driving across Tibet, hiking to over 18,000 feet to circle the sacred Mount Kailash.

I was with Maharaji in October 2012 to celebrate his 99th birthday. I had to leave soon afterward for a teaching engagement in Mexico. When saying goodbye, I said that I would see him again in January. “Maybe,” Maharaji replied with a smile. He had a wonderful sense of humor so I thought he was playing with me like so many times previously. A month later Maharaji left his physical form. As an enlightened saint, his coffin was immersed in the Ganges opposite the Ashram. I continue to visit the Ashram as often as my schedule allows, supporting the new Guru and school in whatever way I can and basking in Maharaji’s still-present energy.

A Return to Chopra

Sadly, David Simon also left us earlier that year. The following year, Deepak asked me to return to teaching at the Chopra Center, which I was happy to do. We have expanded many of our programs, created online versions, and dip deeper into the ancient teachings. Whereas the enlightened masters of old could communicate to anyone using the power of their consciousness, we now have the internet and social media to make us global yogis. I continue my exploration of Vedic wisdom and my somewhat reclusive lifestyle allows plenty of time for personal practices.

I have visited Vedic astrologers in India, including those who read one’s destiny from ancient scrolls. They often tell me that I have a blessed life, I agree with them 100 percent. I’ve never had a particular desire to be rich or famous. I’m honored to have been given the title of Chopra Chief Meditation Officer but am happy being a simple seeker on a spiritual journey, with every day being a step closer to Enlightenment.

Overcoming the 8 Obstacles to Mindfulness 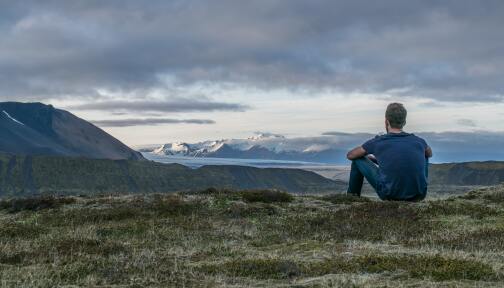 4 Tools to Nourish Your Mind & Body for the New Year