In a world plagued by food shortage that are reaching crisis level, carbohydrates are the easiest salvation and yet the greatest temptation to abuse. Ironically, the same is true in prosperous countries but for opposite reasons. Where food is desperately needed, vast portions of the ecosystem are obliterated to make way for a small handful of crops, particularly rice and wheat, that can provide abundant, cheap calories to a mass population. In well-fed societies where food can be channeled for diversion rather than raw fuel, refiners mangle natural carbohydrates to produce refined sugar and flour.

Either way, it has taken thousands of years to move from the first farmers, who paved the way for civilization by cultivating wild grains, to our present situation. Most of the world cannot survive without more grains and vegetables – our primary source of carbohydrates – while a small portion of the world faces an epidemic of obesity and diabetes linked to over consumption of sugar and fat. What will give us a balanced use of the body’s main source of energy without falling into gross misuse?

When Our Mind Rules Our Eating

Since the reader is almost certain to belong to a prosperous society, balance begins with two steps: refusing to join the processed food glut and putting sugar and starch back in place where they naturally belong. The issue isn’t really how much fat, protein, and carbohydrate to ingest every day. It’s more important to stop abusing your body’s great gift of adaptability. Because human beings can adapt to almost any diet, you are in a situation no other living creature faces: our minds rule our diet.

Some people are naturally sensitive to bodily sensations. When they say, “My body is telling me” or “I need to eat such-and-such,” there’s a real basis for the statement. The rest of us, the vast majority, eat out of our heads. We are susceptible to advertising, suggestive selling in restaurants (“Did anybody save room for our delicious chocolate cheesecake?”) diet fads, diet scares, and endless “breakthroughs” over how to lose those extra pounds. In the massive food industry, the cheapest calories for sale are processed sugar, which leads to the disturbing fact that the average American consumes 156 pounds of added sugar per year. “Added” is the word that should shock you. As people consume 31 five-pound bags of processed sugar a year, much of it in processed corn syrup and white cane sugar, even more comes to them in fruits and vegetables.

Scare tactics haven’t altered this picture, which has been the same for decades. A recent study showed that adult males who regularly consume sodas are 20% more likely to suffer a heart attack. That seems like a strange finding, since a typical can of pop, although it contains from 12 to 18 teaspoons of sugar, is still free of fat, the molecule that eventually can clog coronary arteries. But soda is most often met in fast-food chains combined with high-fat burgers and fries. Lured by the three addictive tastes of sweet, sour, and salty, we think we are making choices with our minds when in fact the persistent message from our taste buds – along with mass media – have made the American diet mindless for millions of people.

Satisfy Your Desire for a Better Life
Your goal should be to bring your mind back in control of your diet. This step is more important than any fad or crusade. Forget food groups and remember yourself. You are here to satisfy your desire for a better life, and that means reaching in a state of well-being. As with protein and fat, carbohydrates fall in line with well-being if you ask a few basic questions:

The glut of sugar we consume is tied to how you answer these questions, because sugar can be abused so easily that it leads to junk satisfaction (a brief sugar high), taste addiction (craving sugary foods even when you are not hungry), broken connection to bodily signals (not knowing when your stomach is empty or full), and reaching for emotional surrogates (eating in order not to feel bad). None of this abuse is part of sugar itself. None of it relates to what your body actually needs as fuel. The best nutrition a=advice in the world is pointless until your relationship to food has been straightened out.
That’s a major process that reaches far beyond three meals a day. Carbs are only a sliver of the solutions, but since they play a big role in the problem, let’s arm ourselves with some basic knowledge.

What Are Carbohydrates?
To your body, carbohydrates are the most readily digested fuel. They are converted into energy, which everyone needs not only for physical activity but for basic metabolic functions. Every cell needs fats and proteins as well, but carbs provide quick, easily accessible fuel. Once metabolized by enzymes in the digestive system, most carbohydrates break down into simple sugars, which permeate the intestinal wall and then course through the bloodstream to deliver a caloric payload to your cells.

There are three main categories of carbohydrates:

Most people naturally associate sugar and sweetness. But in scientific terms, sugars are not identified by flavor but by their chemical makeup. All sugars are based on a simple union of carbon, hydrogen, and oxygen molecules (C, H, and O). The sweetness of sugars will vary depending on how many molecules each of C, H, and O are in the sugar’s chemical formula.
Carbs have long been neatly grouped into two categories that also make diet choice more clear cut: simple carbohydrates and complex carbohydrates. You’ve heard many times that we should be eating complex carbohydrates and shunning simple carbohydrates. It would be convenient if one group represents “good” carbs and the other “bad” carbs. However, the health implications are not quite so neat and tidy.

Simple carbohydrates are so named because they are built on just one or two molecules. The structure of other sugars is termed “complex” because they have a molecular structure that is constructed of two or more joined molecules. (There are more complicated ways that sugars combine in nature, but we don’t need to go into those.) In this case, simple doesn’t equate with bad. Only the smallest molecules of sugar can pass through the intestinal walls and into the bloodstream. That’s why foods ingested as simple carbohydrates (single- and double-molecule sugars) can be used immediately. Complex carbohydrates (three or more molecules) require more time and action to break down and be absorbed.

Some simple sugars occur naturally in vegetables, milk, honey, and other unprocessed foods. Synthetic sweeteners such as corn syrup and high fructose are simple sugars as well. The problem with all of them arises because simple carbs cause a rapid rise and fall in glucose, or blood sugar, leaving you feeling hungry faster. Like pieces of wood going into a chipper, simple carbs resemble narrow branches and leaves that are quickly shredded. Complex or “long chain” carbs are bigger pieces, like thick branches and tree trunks that have to be fed slowly through the chipper to be broken down. Due to their bulkier, compound structure, complex carbs remain in the system for a longer time, providing slow-burning energy and longer durations of satiety, or feeling full. (Athletes who “carb up” begin the night before, taking advantage of the body’s ability to use long-term fuel sources.)

The threshold for a normal fasting glucose level in healthy people is 99 mg/dL; that is, 99 milligrams of glucose per 1/10th liter of blood. Lower than normal levels are characterized as hypoglycemia, indicating around 70 mg/dL and lower. This condition can be traced to three causes. The body may be using up the available blood sugar, or the glucose ingested may be released into the bloodstream too slowly. It’s also possible that too much insulin is being released.

Higher than normal levels of blood sugar are an indication of the opposite state, hyperglycemia. It exists as a threshold condition known as prediabetes (between 100 and 125 mg/dL) and further on clinical diabetes (126 mg/dL and higher). Elevated blood sugar is caused either by too little insulin being released by the pancreas or the body’s inability to use insulin properly. After you eat and sugars pass from the small intestine into the bloodstream, the pancreas detects this increase in blood sugar and secretes insulin in response. Most cells of the body have insulin receptors, which bind to the insulin molecule. The cell can then turn on other receptors that absorb glucose through the cell wall. Once absorbed, glucose may be used for energy or stored for the future.

Understanding Glycemic Ratings
The glycemic index (GI) ranks hundreds of foods on a scale of 0-100 according to their impact on blood sugar. The GI indicates how intensely and rapidly a food will influence glucose and insulin levels.Glucose, being the sugar that cells can immediately use as food, is the GI’s measuring stick and tops the index at a rating of 100. Foods in the lower range, which include many complex carbohydrates, are absorbed into the blood slowly. With a gradual and prolonged effect on blood sugar and insulin, low GI foods have a proven health benefit. The conviction of GI proponents—which include the World Health Organization, the National Institutes of Health, the Harvard School of Public Health, and others—is that diet should be based on low GI foods to prevent and even treat diseases that are in epidemic proportions in the Western world; namely, diabetes, obesity, and cardiovascular disease.

Instead of fretting over recommended allowances and food pyramids, it’s simpler to eat within a “calorie budget.” As your basic expenditure, you need to cover the essentials—vegetables and fruits, and possibly whole grains and dairy products—before the budget can afford to spend calories on foods that offer minimal nutritive value. Luxury isn’t bad – every life should have a sense of abundance – but wasteful spending is different. You don’t have to forbid yourself a treat here and there, but consider how it fits into your dietary budget.

Tune into Your Own Individual Needs
Yet every road leads back to holistic well-being. You can eat too much and harm your body. You can eat the wrong foods for what your cells actually need. You can eat all the “right’ foods but neglect to exercise, and exercise fanatics can forget to be relaxed and content simply with being. As nutrition becomes more scientific, it becomes more reductionist. Remember that no one ever became healthy by memorizing calorie charts and the government’s RDA of vitamins.

Millions of Americans make the numbers their enemy, as we are inundated with data. The scariest and probably the most useless data concerns food and dieting. Facts won’t make you achieve the ideal figure, a healthy heart, or freedom from aging and disease. Life isn’t a puzzle with many pieces that need to fit where they belong. Life is an unfolding process, and it’s your choice to make that process into one of continuous evolution. 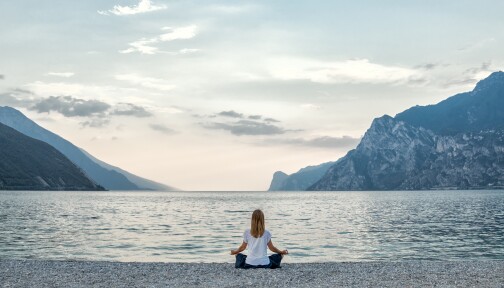