Brahma: The Archetype of Creation

Brahma, the god of creation, is usually depicted as a bearded, four-faced, four-armed deity. These four faces represent the sacred knowledge of the four Vedas: Rig, Yajur, Sama, and Atharva. The faces symbolize that Brahma is the source of all knowledge needed for the creation of the universe and the arms represent the four directions illustrating Brahma’s omnipotence.

Brahma, who is part of a trinity of major gods in Hinduism, is an archetype who symbolizes the universal mind as well as intellect. Archetypes can be a source of inspiration for you; the archetype might have a particular quality or trait that you identify with. With Brahma, you might call upon him during meditation when you want to tap into the universal mind and are seeking knowledge.

The Story of Brahma

Brahma is said to have created the entire universe, including himself. He began by creating water and dropping a seed into the primal ocean. The seed became a golden egg from which Brahma emerged. The remaining shell and material of the golden egg then expanded to become the universe.

In the earliest depictions of Brahma, he is portrayed as a four-headed god sitting on a lotus, symbolizing that he is always rooted in infinite reality. Each head recites one of the four Vedas, the oldest holy texts in Hinduism.

Brahma is wedded to Saraswati, the goddess of knowledge. Saraswati, whose name literally means “one who flows,” also symbolizes fertility and prosperity. Together the pair of deities represents consciousness and the creative impulse.

Although Brahma is one of the three major gods of the Hindu pantheon, he is not widely worshipped like Vishnu, the preserver, or Shiva, the god of destruction. In fact, only two temples in India are dedicated to Brahma―one in Pushkar and the other in Kerala.

The Vahana of Ganesha

All living creatures, including animals, have divine consciousness known as Brahman. Deities, including Brahma are typically associated with a particular animal or bird that acts as a vehicle—or vahana—to transport the gods and goddesses wherever they need to go.

Brahma also has four hands, in which he holds a water-pot, a manuscript (the Vedas), a scepter, and a mala or rosary. He wears a black antelope hide, which stands for austerity, and he rides on a swan. The swan is Brahma’s vahana. The swan is an extension of Brahma’s powers.

While there are few temples dedicated to Brahma and many Hindu households do not pray to him, he can be useful as you seek greater awareness or consciousness.

Art as Meditation: How Painting Landscapes Can Promote Healing 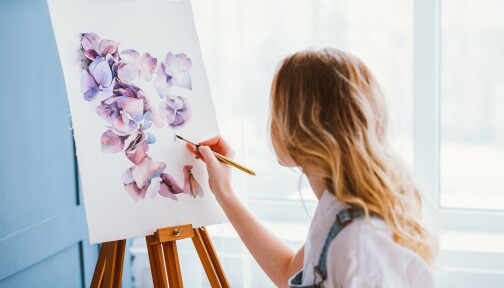