A Glimpse of India: 8 Experiences for Your First Visit

India is a total sensory experience; it’s a plethora of sights, tastes, smells, and sounds. The mundane or the bizarre, the chaotic or the silent, the profane or the profound, can be waiting around any corner. Sooner or later, those of us who study and practice the teachings of Vedanta get drawn to visit India. The Land of the Veda calls us home. Whether you answer her call or prefer armchair travel, here’s a small glimpse of what India has to offer.

Rivers are the life-blood of India. As well as providing water for crops and village homes, they are used for bathing, doing laundry, washing animals, and performing sacred rituals. They are also the pilgrimage destination for devout Hindus, and become the final resting place for many a devotee’s cremated ashes.

India’s holiest river, the Ganges, descends from the snow-capped Himalayas turning westward to wind her way across India’s great northern plain. Ma Ganga, as she is known, is worshipped throughout India as the compassionate Goddess who flows from heaven bringing life, sustenance, and purification to all who are touched by her waters. The devout believe that bathing in the Ganges washes away the sins of hundreds of lifetimes. Having dipped in the Ganges many times, I now realize all the sins I must have washed away!

Temples and shrines of all shapes and sizes are found in towns, in small obscure villages, and on lonely hilltops throughout India. Many date back thousands of years, some having been knocked down by invaders and rebuilt by a later generation. Popular temples are often filled with pilgrims from all over India and beyond.

On your first visit to an Indian temple, you may be surprised by the amount of noise and activity—quite unlike the demure silence of Western churches and cathedrals. Priests will be chanting, making offerings at a variety of shrines, and breaking open coconuts. Bells will be ringing, hordes of pilgrims will be crowding excitedly in front of their favorite deity, and in the larger temples, you may meeting an elephant or two. Cows and dogs are commonplace in the outer areas and the monkeys of course go where they like. However, beneath all the hustle and bustle is a deep spirituality and, for the devotees, the temples are objects of adoration and the home of their gods.

India has an ascetic tradition like none other in the world. For thousands of years, individuals have stepped out of the conventional norm to pursue their own inner search for the Divine. You will meet these holy people, known as Sadhus, wandering along a dusty road, making offerings at a sacred shrine or bathing in sacred rivers. Some have chosen this life from an early age while many others have ‘completed’ their family obligations and decided to renounce the material world only in their later years. Today there are between four and five million Sadhus in India, about 10 percent of which are women.

Most Sadhus still follow the codes laid down by the great ninth century sage and spiritual reformer, Adi Shankara. Most wear orange robes, although some go completely naked and usually belong to a particular sect, paying homage to a specific deity. Followers of Shiva are recognized by the three horizontal stripes, painted on their foreheads in sacred ash. Followers of Vishnu wear a yellow or white “U” shaped symbol on their forehead. These wandering holy men rely on the generosity of ashrams and temples for a place to sleep and food to eat.

At festivals and auspicious times, many thousands will gather, some wild-haired and wild-eyed, others with grandfatherly eyes twinkling through bushy gray beards. Although they are still treated with great respect, India’s move toward westernization is making it increasingly difficult for Sadhus to follow their traditional habits.

You will see many animals working or roaming the streets in India, but none as prevalent as the cow. Cows are worshiped in India as the Divine Mother and, as such, are loved and respected by every Hindu. You will often see them colorfully painted and decorated. It is auspicious to see a cow first thing in the morning and killing a cow is considered a great sin. The cow represents Lakshmi, the goddess of abundance, and lives a life of selfless giving. Its milk, dung, and urine all have a usefulness. Bulls are put to work pulling carts and ploughs. It’s even said that breathing the air that passes over a cow generates energy and vitality—try it!

Cows very much set the pace of India as everything and everybody gives way to them. Except in the center of major cities, you’ll find cows wandering the streets, lying down at intersections, and helping themselves to anything that looks tasty. I was once ‘mugged’ by a cow who took a fancy to the flower garland I was wearing.

Unlike westerners, most Indians do not need “their space.” Indians enjoy being close to each other and often, close to you. In India, heterosexual men holding hands with each other is a common expression of friendship.

So don’t be surprised if, after carefully mapping out “your space” on a train seat, park bench, or temple floor, two or three Indians manage to happily insert themselves alongside you. Children will crowd around you wanting to know your name, which country you’re from, and to shake your hand. Men will often stand uncomfortably close and just stare at you—you should just smile and know that this is the norm in India.

You will also see the space issue with traffic, where drivers love to squeeze themselves into impossible spaces when passing another vehicle. Every Indian driver knows the thickness of paint on his/her vehicle.

India is a land where many of us go to experience deep silence, such as the inner silence during your meditation, viewing majestic mountains, sitting by a sacred river, or watching the sun set over the ocean. And truly there are many wonderful and peaceful places; however, your first experience of India will be filled with noise. Indians love everything at full volume. Whether it’s the Bollywood hit blaring through a shop door, the chants being broadcast from an ashram roof, or the wedding procession band, it has to be loud and the more distorted and crackly the better!

Then there are the horns. The pride of every Indian driver is his horn. An Indian driver without a horn is mute and probably would rather stay at home. There is almost no road rage in India but drivers will take every opportunity to honk their horns. Honk honk! I’m passing you; honk honk! you’re passing me; honk honk! I think the red light is about to change; honk honk! I have a new horn!

On Indian roads, it is the survival of the biggest. With the exception of cows, who always take precedent, the bigger the vehicle, the greater the respect. Indian drivers do not like to give-way or wait and always look for an alternative, which often includes driving on the wrong side of the road, the sidewalk, or even across a roadside field. You, as a pedestrian, are only slightly above dogs, on the highway pecking order. When crossing a road, look both ways at once, pick your moment, pray to your favorite deity, and run.

Nowadays, a drink called chai tea latte can be ordered in most western coffee shops. However, the Hindi word chai actually means regular black tea. The spicy variety made with milk is called masala chai or mixed tea. The best place to drink it is on the side of the road where the Chai Wallah makes it fresh (not from concentrate) by boiling together water, milk, loose black tea, sugar, and this spice mix, often over an open fire. When ready, the piping hot mixture is strained into small disposable, clay cups. Sit on an upturned milk crate and enjoy, slurping is socially acceptable. Ahhhhhhh!

Do you feel compelled to share your wisdom and help others? Be part of a global movement and get certified to teach yoga and meditation at the Chopra Center. Learn More. 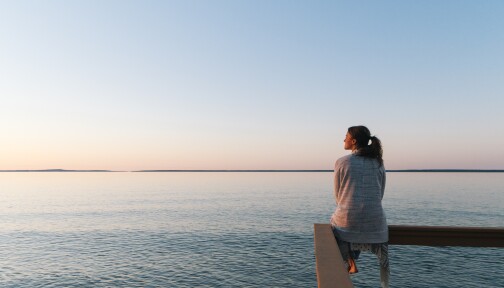 Pure Love Is the Essence of Life